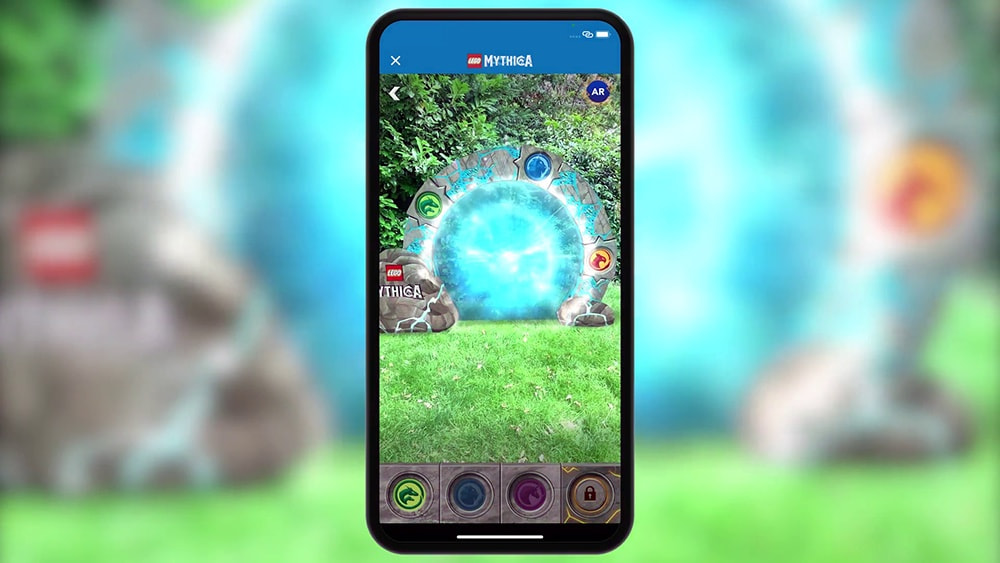 The hidden force inside every child is creativity. Creativity is the energy for LEGO Mythica. But children today lead busy lives and creativity gets pushed aside.

A portal in LEGOLAND has opened to inspire children and families to create and build once more.

LEGO Mythica has come to life through a whole new world with a tentpole flying theatre ride – a first for the UK market. In addition, there are additional rides, a play area and also a playscape.

Technology was employed to:

One of the challenges for any theme park or attraction is how to deliver an experience that can deliver against the ever-changing and accelerating digital expectations of audiences without requiring massive and continuous capital expenditure and cost.

Digital was employed to bring the brand proposition to life. If LEGO Mythica was the land where LEGO creatures come to life, we had to find a way to show these creatures for ‘real’. Also, to build a greater level of relevance and interest; the target audience is tech-savvy; the challenge was to incorporate technology in a subtle, less intrusive but engaging way.

Modern smartphones come equipped with powerful cameras, CPU and GPU capabilities to support rich and immersive augmented reality experiences: overlaying the physical world of the resort with digital content to surprise and delight guests and enhance the visitor experience.

With the incredible new LEGO® IP for LEGO® MYTHICA we were able to do just that through the existing LEGOLAND® Windsor App: creating a seamless connection between the awesome LEGO® statues in the park and unleashing the mythical world they inhabit with augmented reality from your smartphone.

Better still, the journey didn’t just start in the park: through AR we were able to start the journey at home for guests allowing them to enter the Mythical realm through AR portals. They could continue their journey by visiting statues in the park that could be brought to life; and finally, some lucky guests could also receive special AR Pop badges to scan and take home with them.

At the heart of this brand new IP from LEGO® is the central idea of two worlds linked together – the real world we inhabit and the hidden realm of LEGO® MYTHICA. Between these two worlds live the LEGO® creatures in their brick form alongside their imagined real-world selves in the mythical realm all powered by the imaginations and creativity of children.

To bring this compelling narrative to life LEGOLAND® Windsor teamed up with AR specialists Zappar. Created using Zappar’s technology, the AR functionality was added into the LEGOLAND® Windsor resort native app to help visitors immerse themselves in this incredible new world and introduce them to the backstory, mythical creatures and enchanting realms.

The AR is activated exclusively via the app, which users are encouraged to download before they enter the site. When roaming around the LEGO® MYTHICA area, visitors come across the LEGO® statues of mythical creatures

Scanning these special plaques at the resort, with branded Mythica codes that accompany these LEGO® statues, via the app reveals their real-world characters in AR brought dramatically to life through a vortex creating a portal through to LEGO® MYTHICA realms right before their eyes in the park.

Users can take selfies and videos with the creatures, collect digital cards about the characters and learn more about their backstory via the app.

In addition, immersive 3D portals can be placed at home as well as in the park, where users can visit four different areas of the magical world: the Magical Forest; Hidden Valley; Raging Seas; and Mount Lava as if crossing the threshold into this hidden world.

In each location, they discover more about the animals, flora and fauna that exist in LEGO® MYTHICA by collecting special orbs and receiving exclusive golden digital cards for their collection and for their efforts.

Finally, the app encourages random acts of kindness. Staff at the resort can give two limited edition ‘POP badges’ that feature special LEGO® MYTHICA designs and open spy-holes into the realm by scanning the artwork on the badges using the AR function to reveal exclusive glimpses of the realm.

Results since launch have shown just how powerful this connection has been with guests spending over 2 mins 30 seconds engaging with each individual statue and AR portal experience on average.

We can also see from the data that the AR activity extended the user journey and time spent with the IP both before and after closing time at the Park through the portals, photo feature and POP badges.

In total, from launch in May up until the start of September, LEGOLAND® Windsor guests have spent the equivalent of 114 days and 12 hours interacting with the AR experience in the app exploring the digital realm!

The use of AR as a digital innovation perfectly complemented the physical experience but also extended the user journey through the app before, during and after their visit: giving more reasons to download the app, spend time with LEGOLAND Windsor, and immerse themselves in the new LEGO Mythica IP. It added an effortless digital layer to modernise the overall experience in a way that was cost-effective, brand-enhancing and loved by guests.