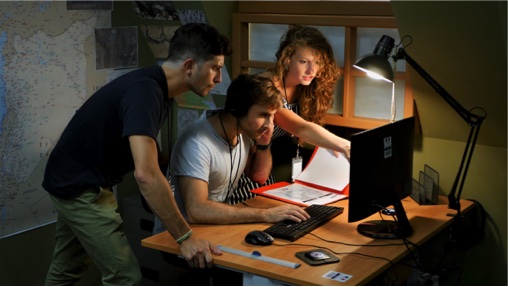 Ranked among the top 3 International TV Shows of the Decade by The New York Times, The Bureau revolves around the lives of agents of the DGSE, France’s principal external security service.

The TV show is praised for its realism to which we’ve aimed at giving the most credit. It’s the essence of the show hence our experience.

During the development of the scenario and the production of the sets, we worked in close collaboration with the production company and the DGSE (French Secret Service) to create the most realistic scenario. We built the sets with the participation of experts from the immersive industry.

It received a great Press coverage: the experience has been featured in the most important lifestyle medias presenting it as a «must-do» activity in Paris. It’s been ranked #1 by Tripadvisor-Paris Activities.

We’ve truly created a unique episode of the TV show enabling people to become special characters of the Show. The storytelling is the foundation of such innovation as we wrote this Immersive Experience as a spin-off of the Bureau.

Not only did we have to create a unique spin-off episode but we’ve also had to build the world around it to make it as realistic as possible.

By the end of those 2 hours, people really think they had their first day at the french secret services. They believe they were inside the TV Show thanks to the interactions with the actors, the unique sets and the way the scenario adapts throughout the experience to their choices, up to five different endings.

Each team has a different experience and people return to experience what would happen with different actions.

Creating an Immersive TV Show had a great echo in France since it was the first time an IP-based Immersive Experience was created.

The fact that this experience is in a small group, still with a lot of actors and more than 300sqm of sets to explore makes it unique.

The participation of the original actors of the TV Show makes it real for the group as they directly talk to them with special and interactive videos and audios.