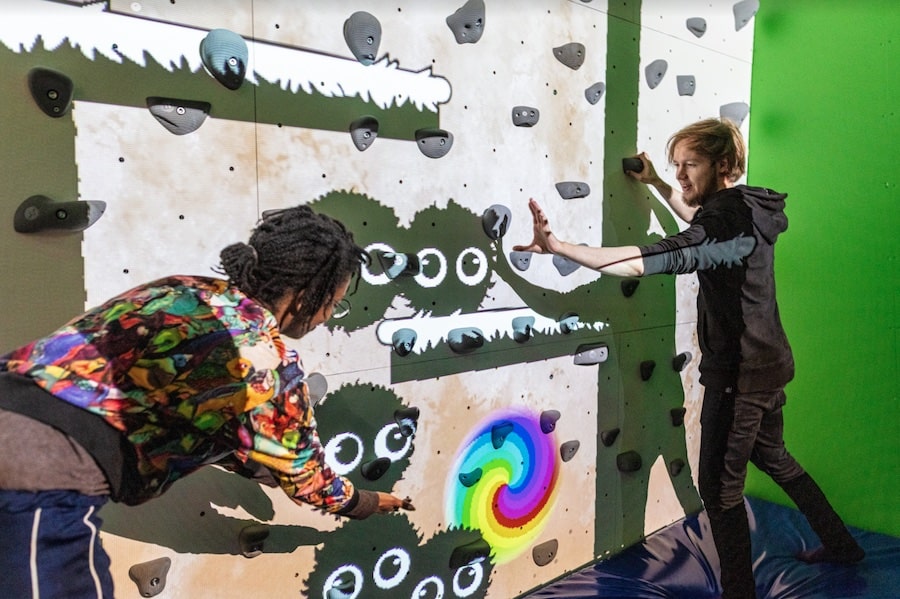 Have you ever tickled adorable creatures using just your shadow? And done that while climbing? Now you can with ValoClimb and a game called Shadowlings.

ValoClimb is a fully automatic attraction designed to turn a regular climbing wall into an incredibly fun immersive digital experience where the players get to play high-quality games while climbing. ValoClimb’s beating heart is our body tracking software that is so precise that it turns an ordinary climbing wall into a virtual touchscreen!

With Shadowlings, the custom tracking system detects the players’ shadows on the wall. In addition, we added an exact and responsive physics simulation system that drives the whole game experience. Even the quickest of movements send the game creatures flying off exactly where the players want to.

Also, we made creatures that feel alive and love to interact with the player. From their facial expressions to their fur, everything reacts to what the players do. This type of interaction has never been done before in commercial products!

One of our other games allow more precise tracking of players’ movement and poses. This improvement means that the game recognises each player and keeps the score of their individual points. The game also counts points for the whole group of people playing at the same time. Making the gaming experience not only active and fun but also super social!

To top off the social experience, after each game, the player can share their gameplay video online!

In all our games, the meticulous game design makes sure that the players can start playing and enjoying our games instantly without having to read instructions or spend time figuring out how the games work. The game tempo and various levels make sure that the games reward more active climbers while still being enjoyable for beginners.

We created ValoJump since we wanted to take trampoline jumping to a completely new level, digital!

For that, we took our proprietary body tracking technology and combined it with a screen and a trampoline or an air track. As a last touch, we connected two of such mixed reality trampoline games together. The result was amazing: the world’s first two-player game for a trampoline! In other words, two different players can jump on two separate trampolines while appearing together in the same game world. To be more exact, we place the mirror image of the player inside the actual video game!

However, to make ValoJump stand out from the crowd, they added something we like to call the Superhero effect! Meaning that, when need be, we exaggerate the players moves in the game world! The end result is an out of this world thrilling game experience that has literally sucked you inside the game.

Of course, we also included a game selection of several two-player games and within one game several different levels and themes. No more avatars, but pure exergaming fun where you can challenge yourself and your friends to a completely different type of match that will not only leave you a lasting memory but that the player can actually retrieve in a form of a gameplay video.

This video memory is easy to share online by using the touchscreen that comes with the product itself.

From an innovation perspective, we are proud to say that we are the world’s first company to create a two-player interactive game platform for trampolines. What has driven us is the urge to be able to offer people the opportunity to have fun while moving. In short, we create exergames that are fun, physically challenging and addictive – in the best possible way.

Furthermore, we include different levels of difficulty so that all players can find a suitable challenge. Finally and possibly most importantly, we create games that are enjoyable – several times.

Imagine you beat a new personal high score in your favourite game, you performed your best training session, you rank first in a leaderboard…but your friends don’t see it. We created ValoLeague and ValoApp to give players ownership of their fun and sports experiences and use the power of community to push their own skills to new heights.

ValoLeague merges sports, games, and competitions to the first-ever Active eSports League for Mixed-Reality (XR) trampoline and climbing wall. Available around the world at over 700 installations in more than 60 countries, and running over multiple competition seasons throughout the year.
Games from ValoClimb, the original augmented climbing wall, and ValoJump for single and multiplayer gaming, transform immersive gameplay into a global sport league. The combination of physical sports and digital gameplay encourages an active lifestyle for sports and gaming enthusiasts regardless of age or skill set. Players compete in global competitions and local events, engaging and connecting to a community with a common passion.

ValoApp, the official mobile application, adds the layer the new generation of players expects: mobile, shareable, anytime. Players use ValoApp to log in to their profile before the gameplay to store their personal videos in one easy platform, creating memories and sharing them on the spot. At the same time, shareable experiences encourage people to move and challenge each other on a global scale, while still having awesome fun with friends and family around you! Sports and shareability took on whole new importance since people are not necessarily able to be at the same event due to travel restrictions. ValoLeague serves players as a platform to connect, engage, share experiences and best practices with fellow sports enthusiasts on their own terms.

ValoApp is the official mobile app that gives players ownership of their videos, an easy way to join competitions from over 700 installations in more than 60 countries.